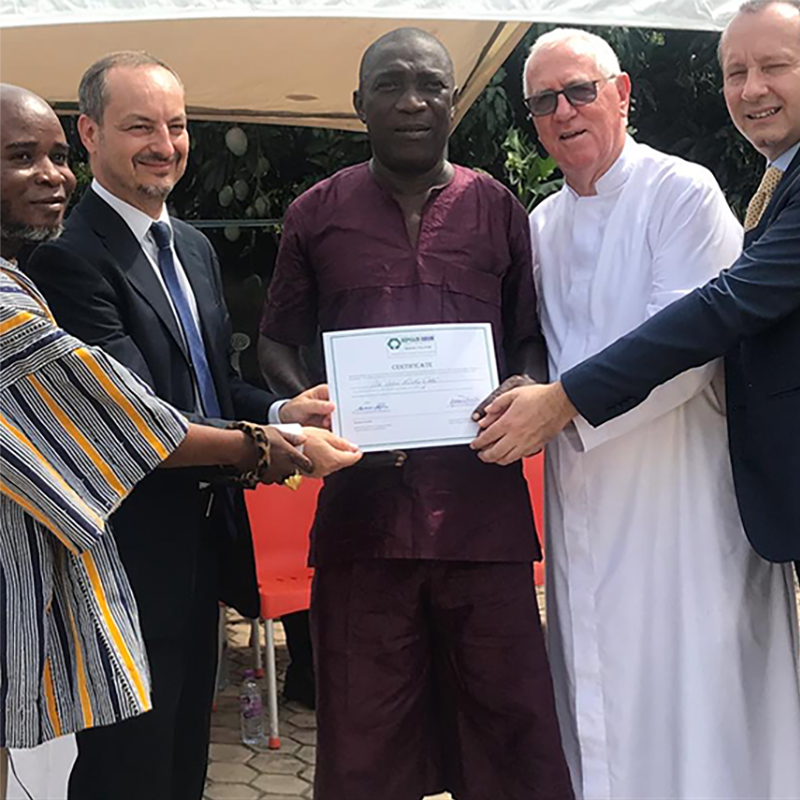 Activity report and results obtained in the village project

The year 2019, after a start with a lot of/with few* difficulties, ended with the assignment of land plots to the farmers in a ceremony attended by many locals*, in the presence of Dr. Affaba (Managing Director Sipcam Oxon), Dr. Varratta (project manager) , Dr. Garello (on-site manager); they were joined by the Chiefs (heads of the area), the Paramount chief (head of the entire territory), Father Campbell (director of the local diocese) who celebrated the event and blessed the village and the Italian Ambassador in Ghana, Dr. Favilli, who supported the initiative.

As already highlighted by previous reports, the activities in the fields this year involved a certain number of people (nominally 20 "owners" to which, however, family members must be added), who were assigned a plot of about 4000 m² (one acre). Some have given up due to the Lockdown*, but are in the process of returning or being replaced.

At the same time as the assignments, on a portion of land, crops were started under direct control to test their viability and economic value.

It must be considered that for a period of four months the activities were quite hindered due to the lockdown measures implemented in Ghana, which made it really difficult for residents of Ghana to move to and from the Village. Only thanks to the good offices of Father Campbell we were able to obtain a sort of permit, nevertheless several times we had difficult moments with the army and police patrols that guarded the city limits.

This had repercussions on the outcome of the first installations*, given that the presence in the field was forcibly limited and often the necessary attention to the crops could not be given both by us and by the ricipients themselves and, as already mentioned before, some abandoned their plot*. Therefore, the first season did not bring economically significant results, even though the participants could begin to see the potential of earning income from working in the fields.

An important success, from an agronomic point of view, was the creation of soil preparation systems. With dedication, patience, going against local customs and thanks to the work carried out on the front line on our plots, after long discussions we were able to demonstrate and convince all the recipients to cultivate in grooves with relatively deep drains and made following the contour lines instead of the maximum slope.

This allowed us to avoid soil erosion during the period of intense rain (which had happened last year with devastating effects) and to keep the crops sheltered from flooding.

While this may seem obvious to a European farmer, in this instance it can be considered a radical change that is finally changing the habits of the local farmer.

We have installed a shaded structure to use as a nursery. In this case, we are also trying to teach  to  self-producing the seedlings to be transplanted to make the most of the few resources available by eliminating loss of seeds, hours of work and therefore costs.  Thereby having the opportunity to use good quality seeds in a more suitable environment, obtaining better seedlings and consequently more homogeneous crops.

After the end of the lockdown, we were finally able to dedicate ourselves to the irrigation system, prepare the purchase of materials and the installation of the pump and then the main supply line. Again, after several troubles (including the theft of the electrical pump cables), and with an elementary hydraulic engineering system developed, suggested and donated by Dr. Branco, former creator of the land reform in southern Italy; a final performance test would be missing but we could finally say that we had achieved irrigation independence without having to depend on rainfall.

We must highlight a very important factor: the change, even if gradual, in the attitude of the people involved, which is the main purpose for which this effort was intended and for which so much energy was spent.

While at the beginning and during part of the initial months skepticism and the tendency to ask for everything without putting in effort or doing something in return reigned, today, probably in the light of the achievements, energy expended and seeing that the crops began to yield you could start to see a certain enthusiasm. In the last meeting (attended by project manager Dr. Varratta) for the first time some of the participants voiced the determination and pride to plan and have "full and beautiful" fields for the next season.

In addition, some beneficiaries contacted at the beginning, who for various reasons had then deserted, are retracing their steps and have asked to be reassigned a piece of land to work and become part of the community.

We have also built a rapport with the Forestry district manager (under whose jurisdiction the land is located) and we are making arrangements to jointly manage a mixed cultivation program with tree crops that would be planted in strips along the borders and between the fields, marking also the boundaries of the plots assigned to the beneficiaries.

In this very difficult year it is only right to mention the support received from some figures, in particular:

Father A. Campbell, an icon of the local Catholic Church, who has encouraged us from the beginning, and who this year used his influence to clear up some difficult situations (as in the case of the lockdown). He then engaged the local clergy for maximum support for the progress of the project.

Father Samuel, in charge of the local parish and manager of the Shai Hills spiritual center, who helped us resolve problems with some of the locals. Always available to lend a hand and a suggestion, thanks to his knowledge of the environment and his influence on people.

Mr. Odei, (in whose home we held the inaugural ceremony with the Ambassador and Dr. Affaba) who, thanks to his position as "elder" of the country, intervened in some problematic situations with local and non-local troublemakers.

We must then mention the Group of local Chiefs (present at the inauguration) who with their influence supported our work and spoke in our favour and supported the project and its implementation, thanks also to the politics of their involvement which enhanced its popularity.

Today we can state that, although very slowly (as always in Africa..), the development of a concrete opportunity for the recipients is closer. With the October meeting, with myself and Dr. Garello in attendance and after the meetings with the recipients, the possible future scenarios were discussed, giving me the power to report back.

For the future we are thinking to plan a considerable increase in the cultivated land (by clearing and reclamation of the remaining part of the land entrusted to us by the Forestry Authority) and to introduce some "extensive" crops such as legumes and sweet corn that can reduce the working hours / ha and cover specific times of the year when growing vegetables may not be convenient.  We must take into consideration an increase in mechanization, as the small rototiller that has been given to us may not be able to carry out some of the heavy work.

In light of the results obtained and the enthusiasm that has arisen, an expansion of farmland is proposed for next year, given that the allocation made by the forestry is more than double the land currently used, with further allocations of new fields to new recipients (recommended as always by the local Diocese) and the creation of a school field where they can teach the first cultivation techniques to local children to ensure that they see the opportunity in managing a field with the possibility of work and livelihood for them and their families.